The 143-metre-long warship, with 6,000-tonne displacement, has "versatile control systems with signature management and radar cross-section reduction features." The other countries having the capability to build stealth warships are the US, the UK, Russia, France, China, Japan and Italy.

Shivalik class warships can deal with multiple threat environment and are fitted with weapon suite comprising both area and point defence systems. It has sensors for air, surface and subsurface surveillance, electronic support and counter equipment and decoys for 'soft kill measures'.

IAF is presently conducting flight trials for the MMRCA Jets. The bids are to expire on April 28. The MOD has asked manufacturers to extend offers for an additional year with the option of revising their price, if warranted, as per report.

The Jets need to go through field trials in all the terrain obtaining in the country. It is a normal process to ask for extension of the validity of the bids by a few months if delay in contract signing is envisaged. One year extension should suffice.

Svipja Technologies
Posted by Brigadier (Retired) Sukhwindar Singh at 6:52 AM No comments:

Indigenous Anti-Submarine Corvettes for the Navy

India launched its first anti-submarine warfare corvette built by GRSE, Kolkata, on 19 Apr 2010. It would be commissioned in 2012. Four ships of this class are under construction, other three are expected to be commissioned by 2015.

The corvette is a small, fast-moving ship with 3,100-tonnage. It will be fitted with the latest indigenous sonars. The torpedo tubes, and scutter (torpedo decoys) launchers contribute to its anti-submarine capability. In addition, the ship will also be equipped with vertically launched Point Defence Missile System (PDMS) and Close- In-Weapon-Systems (CIWS) such as AK 30s and Super Rapid Gun Mount (SRGM). The ship is equipped with decoy system, Kavach which counters the threat of various anti-ship missiles.

At present the Indian Navy does not have any anti-submarine corvettes. It uses bigger ships like frigates and destroyers for anti-sub ops.

'Our defence forces require timely and cost effective acquisition of defence equipment to enable them to meet any challenge to the country's security. The emerging security scenario is very challenging. Nobody can say what will happen in some of our neighbouring areas. India will have to be fully prepared, our armed forces will have to be fully prepared to meet any challenge from any quarter and they must be able to protect every inch of Indian territory' said the Defence Minister in the IDSA Defence Acquisition Seminar in Jan 2010.

It is therefore essential that we all are conversant with India's Defence Acquisition Process to make it happen expeditiously but correctly.

Trials for procuring 155 mm, 52-calibre towed guns began in summer 2002, when the Ministry of Defence (MoD) began evaluating three guns from BAE Systems, Soltam; and Denel. Five rounds of trials, conducted in 2002; 2003; 2004; and 2006; reached no conclusion. Denel was blacklisted for corruption in September 2005; the other two guns did not meet the army’s standards.

Indian Field Howitzer-2000 (IFH-2000), developed by Singapore Technologies Kinetics, or STK joined-in the tender. In 2009, STK was 'blacklisted' for corruption after the arrest of the Chairman, OFB. STK has now been asked to field its gun for trials.

Svipja Technologies
Posted by Brigadier (Retired) Sukhwindar Singh at 8:50 AM No comments:

Defence Procurement: A Serious Matter to Give Way to Advocacy

There is ‘understandable rhetoric’ in the media about Indian Defence Procurement. It is unsettling in a sense. Creates confusion all round. It is to the credit of DAC/MOD that it does not let itself swayed in a hurry – after all defence procurements are not be made in a jiffy. We need to be pragmatics, accountable and true to the ‘nation’, personal gains notwithstanding.

India is one of the largest armed and systems importers in Defense.

The MOD is likely to release a comprehensive Defense Production Policy (Drip), on the lines of the DPP that to strengthen the country’s Defence Industrial Base (DIB). The DPrP and DPP will give a new impetus to indigenization in line with our goal of near- self-reliance.

As per the DPP, The Govt. is willing to fund up to 80% of the development costs of some systems.

Also, the draft Long Term Integrated Perspective Plan (LTIPP) up to 2022 is under making.

Svipja Technologies
http://www.svipja.com/
Posted by Brigadier (Retired) Sukhwindar Singh at 8:55 AM No comments:

FDI in Defence Industry is permissible up to 26%, under Government route subject to Industrial license under the Industries (Development & Regulation) Act 1951 and the following conditions:

Licence applications will be considered and licences given by the Department of Industrial Policy & Promotion, Ministry of Commerce & Industry, in consultation with Ministry of Defence.

Cases involving FDI will be considered by the FIPB and licences given by the Department of Industrial Policy & Promotion in consultation with Ministry of Defence.

The applicant should be an Indian company / partnership firm.

Government decision on applications to FIPB for FDI in defence industry sector will be normally communicated within a time frame of 10 weeks from the date of ack.

Svipja Technologies
Posted by Brigadier (Retired) Sukhwindar Singh at 9:02 AM No comments: 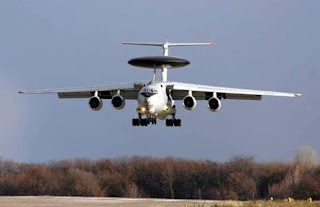 The deal could be worth $1.5 billion. It follows India’s previous order for three IL-76s modified by IAI's Subsidiary, Elta Systems. India is likely to receive its second AEW ac in mid-2010 under the first contract, with the third to follow next year.

The ac is deployed for tactical surveillance, and EW Int missions.

Gas Turbine Research Establishment (GTRE), HQ Bangalore, a DRDO lab, is the nodal agency to spearhead Rs 100 Crores initiative to fund R&D projects in the area of gas turbines. Under this venture, aero R&D projects for investments of Rs 50 lakhs to Rs 5 Crores would be considered for funding. Rs 78 Crores have already been sanctioned. GRTE would support 40 to 45 such projects.

The initiative is expected to fuel "coherent directed research" in the area of gas turbines, DRDO said.

DRDOs Approach takes into account futuristic national programmes. It would support, encourage, nurture, monitor and exploit the design, research, development and manufacturing capability of academic institutions and R&D establishments, industries and other think tanks to carry out frontline work in bringing out next generation gas turbine engine system.

The programme envisages participation of 100 R&D Centres and 1,000 scientists, engineers and technicians.

High-Tech MSMEs should come forward to join the programme.

Svipja Technologies
Posted by Brigadier (Retired) Sukhwindar Singh at 8:51 AM No comments:

India's indigenous naval destroyer, INS Chennai , built in Mazagaon Docks , Mumbai, under the code name, Project 15 Alpha, has been launched on 01 Apr 2010 in Mumbai by the India’s Defence Minister.

The destroyer is the third of the Kolkata class warships built at Mazagaon Docks and displaces more than 6,000 tonnes. Its weaponry is entirely indigenous comprising 16 Brahmos missiles and torpedos. The warship is also equipped with the indigenous Humsa sonar and Ellora EW suite, and carries two helicopters on board.