Mahindra & Mahindra Ltd. has signed a deal to buy aircraft parts-making machinery from Boeing Co.'s plant in Melbourne, Australia. M & M feels the deal will boost orders as it will likely help improve the quality of aircraft parts it produces and attract clients that need to fulfil their offset obligations in India.

The Indian Govt. had put an offset clause on a $15 b, 111 aircraft deal signed in 2005 by national carrier Air India with Boeing and European manufacturer Airbus. Boeing also last year signed a $2 bn deal with the Govt. to supply eight long-range maritime recce and anti-submarine warfare P-8I aircraft to the Indian Navy with offset clause.

In 2009, Mahindra had purchased 75.1% stake in two Australian aerospace companies--Gippsland Aeronautics and Aerostaff Australia--for a total of 1.75 b INR($37.9 m) to expand its aircraft and aerospace-component manufacturing capabilities in Australia.

The company plans to establish an aerospace facility in India, possibly in the South Indian State of Karnataka.


Svipja Technologies
Posted by Brigadier (Retired) Sukhwindar Singh at 9:42 AM No comments:

The Karnataka Govt. has acquired 1,000 acres near the Bangalore International Airport in Devanahalli for the aerospace SEZ. About 55 per cent of the land will be allotted to companies for setting up factories.

Units in the SEZ will cater to domestic demand as well as the export market. The park will include aviation MRO (maintenance, repair and overhaul) activities too.

So far, state-owned defence suppliers BEML Limited and HAL, Mahindra and Mahindra, Dynamatic Technologies and Japan’s Amada have been allotted land. These companies are eyeing a substantial portion of the business emerging out of the offset business opportunity.

Svipja Technologies
Posted by Brigadier (Retired) Sukhwindar Singh at 5:30 AM No comments:

India Ranks Second in Arms Transfer Agreements with US During 2006-2009: A US Report

India ranked second in arms transfer agreements with US during 2006-2009 period, while Saudi Arabia is the leading developing world arms purchaser from 2002-2009.

Congressional Research Service (CRS) told Congressmen that India, while the principal Russian arms customer, has begun to diversify its weapons supplier base. In 2008, India purchased 6 C130J cargo aircraft from the US. This pattern of Indian arms purchases indicates that it is likely that Russian will face strong new competition from other major weapons suppliers for the India arms market.

According to CRS, Asia has traditionally been the second largest developing-world arms market. In 2006-2009, Asia ranked second, accounting for 34 per cent of the total value of all arms transfer agreements with developing nations (USD 59.8 billion).

Read the full Report: India Ranks Second in Arms Transfer Agreements with US During 2006-2009: A US Report


Svipja Technologies
Posted by Brigadier (Retired) Sukhwindar Singh at 5:25 AM No comments:

MOD has issued a global request for information (RFI) to shipbuilding majors to submit their initial offers by the end of Sep 2010 for the six submarines to be constructed under 'Project-75 India'. This comes after the Defence Acquisition Council (DAC) cleared P-75I Project in June. The gigantic naval project will clearly overtake the Rs 42,000 crore project to procure 126 multi-role fighters for IAF, so far dubbed the "mother of all defence deals".

Foreign collaborator is to specify the air-independent propulsion (AIP) being offered for the project. Conventional diesel-electric submarines have to surface every few days to get oxygen to recharge their batteries. But with AIP systems, they can stay submerged for much longer periods, narrowing the gap with nuclear-powered submarines which can operate underwater for virtually unlimited periods.

An appeal has been made by the USIBC; the US AIA (Aerospace Industries Association); the British ADS (Aerospace, Defence and Security); French aerospace body GIFAS; German aerospace body BDLI; and Canadian aerospace body AIAC to the MOD 'to soften India Defence Offset Policy'. Israeli and Russian companies are conspicuously absent from this initiative.

• Enhancing the current 26% ceiling on foreign direct investment (FDI) in defence. The letter states that accepting the Ministry of Commerce’s proposal to enhance FDI to 74% would “bolster confidence” and enable “robust investment in… technology transfer”.
• It suggests allowing dual-use technologies and high-tech civilian projects to be counted as defence offsets. This, the letter argues, would create a high-tech, civilian industry, that would build dual-use products to feed the defence industry. The current offset policy mandates only direct offsets, i.e. products that are directly used in defence systems.
• The MoD should offer multipliers for offsets in key sectors where the MoD most wants technology transfers. For example, if the MoD wants radar technology, it could specify an offset multiplier of 2. A company that transferred radar technology worth $1 million would get $2 million in offset credits. The current policy treats all offsets equally.
• The creation within the MoD of an empowered and adequately staffed permanent “offset authority”. Currently, “there is still ambiguity in how offset contracts will be approved, validated, discharged and measured.”
• Capping financial penalties in defence cooperation, in order to “not deter competition for defence contracts.” The letter points out that “(u)nlimited financial liability inhibits industrial defence cooperation.”

Demands from MoD by the US/EU Offset Consortium 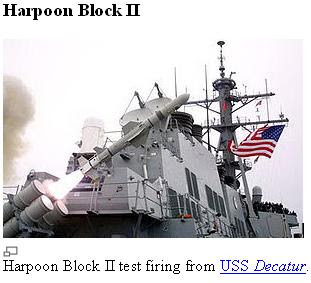 India has signed an agreement with the US government to purchase 24 Harpoon Block II missiles for its Jaguar strike aircraft, in a bid to ramp up its maritime warfare capability.

In production at Boeing facilities in Saint Charles, Missouri, is the Harpoon Block II, intended to offer an expanded engagement envelope, enhanced resistance to electronic countermeasures and improved targeting. Specifically, the Harpoon was initially designed as an open-ocean weapon. The Block II missile provides the Harpoon with a littoral-water anti-ship capability.

The key improvements of the Harpoon Block II are obtained by incorporating the inertial measurement unit from the Joint Direct Attack Munition program, and the software, computer, Global Positioning System (GPS)/inertial navigation system and GPS antenna/receiver from the SLAM Expanded Response (SLAM-ER), an upgrade to the SLAM.

Although initially tested from U.S. Navy ships, the decision was made to not procure Harpoon Block II for the U.S. Navy fleet. Boeing lists 28 foreign navies as Block II customers.

DAC/MOD has decided to exclude Indian Private Shipyards from the construction of six submarines for the Indian Navy under Project 75I. Instead, the first two submarines will be built at a foreign shipyard.

Project 75I initially envisaged all six submarines to be built in India. The MDL was to build three; Hindustan Shipyard Ltd — recently acquired by the MoD from the Ministry of Shipping — would build one; while Indian private sector shipyards, L&T and Pipavav, were to compete to build the remaining two. Now the first two are likely to be built abroad.

This change in earlier decision will require fresh sanction from the CCS typically involving a 12-24-months time.

L&T and Pipavav have invested sufficiently to build world-class shipyards, and have lobbied intensely for a share of the submarine programme.

Senior L&T officials feel that MDL would have its hands full with Scorpene production until at least 2019 and has no capacity to take on another three submarines. MDL has however presented a detailed plan to set-up a second submarine line.

Svipja Technologies
Posted by Brigadier (Retired) Sukhwindar Singh at 8:02 AM No comments: