ARMED FORCES TO BE STAKEHOLDERS IN THE DRDO PROJECTS

It is a 'strategic thought and a welcome decision' to involve the Indian Armed Forces as stakeholders in Defence Projects to be developed by the DRDO. This will check 'free wheeling' by certain agencies and put an onus on all the Defence Establishments to make India self-reliant and self-sufficient; a target that has been eluding Us for variety of reasons. Also the main Users, the Indian Armed Forces, would feel obliged to 'accept' home-developed systems. It is 'Users-Industry-DRDO/Govt.' that need to work in total sync to achieve something substantial by the Indian Defence Industry, and make it competitive globally. My congrats to DAC !! The news reads like this:

We need to increasing involve 'operational armed forces personnel' in the developmental projects rather than greatly depending on military staff loaned to DRDO, DGQA and Other set-ups that support the Dept. of Defence Production(DDP)/MOD which at best gets outdated after 1 year of tenure in DDP Agencies. You need to mesh-in current operational thinking in the Armed Forces in the developmental projects--'file pushing' and 'I am an indep agency/boss' attitude would not help. Could achieve it through the DAC!

We should accept no argument contrary to this decision; bottom line is that it is in our national interest. Defence Offsets could be suitably utilised in such projects.

Posted by Brigadier (Retired) Sukhwindar Singh at 8:30 PM No comments: 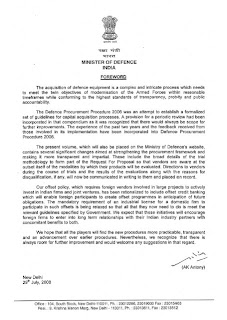 Here is Defence Procurement Procedure (DPP 2008) including Offsets Policy! You could read the complete DPP 2008 on the MOD/India website at link :

Rationalisation of licensing condition, introduction of offset banking listing of defence products and exemption from offset of acquisitions under fast track procedures are some of the salient features of the New Defence Offset Policy as envisaged in the Defence Procurement Procedure (DPP) - 2008 .

Offset policy has been revised to include offset credit banking enabling foreign vendors to create offset programmes in anticipation of future obligations. This will also enable foreign industry and their Indian offset partner to have long term arrangements to discharge offsets and will thus enhance the capacity of the Indian industry to absorb offsets. Under the banking guidelines, a vendor will be able to discharge the banked offset credits for the RFPs which have been issued within two to two and half years depending upon the date of issue of RFP.

The offset obligations are to be fulfilled coterminous within the period of main contract.

If a vendor is able to create more offsets than his obligations under a particular contract, the surplus offset credits can be banked and would remain valid for the period of two financial years after conclusion of the said contract.

A list of defence products has been added to facilitate the foreign vendors in implementing their offset obligations.

Acquisitions under the Fast Track Procedure have to be implemented in a short time to meet imminent operational requirements. These have been exempted from the requirement of offset.