India’s defence minister on Wednesday, 27 May, said arms firms trying to bribe their way into big-ticket defence contracts will be “ruthlessly” excluded from the country’s huge weapons acquisition programme.

India plans to spend $30 billion (around Rs1.43 trillion) by 2012 on arms purchases. “At times, we found certain manipulations and malpractices. We cannot ignore that so we ruthlessly cancelled big ticket items,” defence minister A.K. Antony told reporters. “We will ruthlessly cancel contracts in the future also as in the past. This is not a happy experience but we will be forced to take such action.”

In December 2007, the Indian Air Force scrapped a $600 million deal for 197 helicopters after allegations of corruption in the bidding process. The deal had been awarded to Eurocopter, the helicopter unit of the EADS, which makes civil and military aircraft.

Another deal for 22 attack helicopters was scrapped in March, on the grounds that the firms in the race had failed to meet contractual parameters. Indian defence sources, however, said there were suspicions of irregularities in bidding for the $550 million contract.

“While we are determined to speed up procurement, we cannot compromise on transparency,” Antony said.

Meanwhile, India expects to evaluate jets made by Boeing Co., Lockheed Martin Corp., Dassault Aviation SA and others in two-three months as the government moves to decide on the world’s biggest fighter plane order in play.

India’s plan to buy 126 jets worth $11 billion, is contested by six companies, and is the biggest fighter-plane order in 15 years, according to Chicago-based Boeing.

Bloomberg Contributed to this Story.

Posted by Brigadier (Retired) Sukhwindar Singh at 11:44 AM No comments: 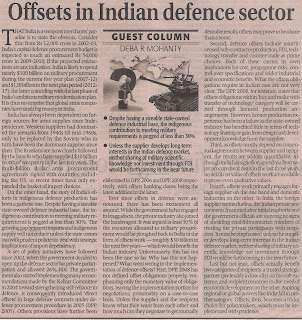 Indian Offset Policy articulations are based on the Indian Perspective of its domestic consumption, technology issues, and exports. And rightly so. All DPPs / Offset Policy Issues point in this direction, routinely revised as we learn, with national interest at its core.

Barring the US, a very few other countries have experience in Defence Offsets, and that too ‘rapped-up’ in the Offsets are both Direct & Indirect Offsets. Most of these Recipient Countries of Offsets are small or Allies of the US. In case of India, it is entirely different. Reasons are many.

India, as I have understood, has articulated its Offset Policy in the spirit of ‘by India, for India’, leaving enough scope for modifications as we gain experience. India’s Offset Policy therefore does not fit into any ‘blue print’.

The primary aim of the Policy is to make Indian Defence Industry state-of-the-art, and competitive with a view to retain independence in defence & policy matters. Some of the important decision matrix discerned by Me on critically analysing the Policy is:

Issue of ‘Hostile Take Over’. This limits the FDI to 26%.

Indian Investors are encouraged to invest their money in the Indian Defence Industry infrastructure. Control of the strategic industry is needed.

Govt. has permitted the ‘Obligor’ to select the ‘local partner’, but remains interceded to ensure that the contract to Manufacture / TT / Buy-Back / Exports, etc, from India fits into the Strategic Defence Policy parameters, Indian Defence Industry being part of it.

Licensed Production in India in the past needs to be differentiated in the present context where the Govt. of India may now insist on clauses like, Meeting the Domestic Need First, Buy-Back, Exports, etc. We are now in a strong bargaining position as a Buyer. We need not carry the baggage of the past. Co-development and Co-production with contracts suitably concluded are a distinct possibility to launch the Industry into the world defence market.

Security & Suspicion are co-related. The Govt. is likely to give information to the production agencies on ‘need-to-know’ basis, enough to move ahead. Suspicion is likely to end progressively.

‘Banking of Offsets’ could be revisited.

We need to allow the existing Offset Policy to move on the maturity curve. The ground situation would force it to correct itself.

What the Private Defence Industry should ask is how the Govt. proposes to assure ROI for them against global competition, especially in view of the Technology Issues, and needs of the Armed Forces to remain state-of-the-art always?

Posted by Brigadier (Retired) Sukhwindar Singh at 9:16 AM No comments:

The responsible authority for the implementation of the Portuguese Offset Law is the Permanent Commission of Reciprocal Concessions (CPC) which is an executive collegial body part of the Ministry of the Economy and Innovation responsible for the areas of national Defense and for the Economy.

The existing legislation regarding the subject of multipliers in Portugal is that each offset program receives a multiplier after the valuation by CPC. Minimum multipliers are specified according to the type of program.

The programs that are related with transfer of technology have a multiplier of no less than 3.

Programs that are of socio-economic interest and the one linked to the defense industry have a multiplier of no less than 2.

Finally, programs linked to creating national capacity to sustain lifecycles of acquired equipment and systems have a multiplier of no less than 2.5.

According to the Offset Law, projects not related to defence can be included in a contract. Actually, there are 3 groups of projects that can be incorporated in an Offset program. Direct programs, meaning programs directly linked to the object of acquisition, indirect programs but connected to the defense industry, (defense related design, development, product or process engineering and production and servicing or any other activity of proven added value) and finally indirect programs meaning programs not connected to defense.

Offsets are being implemented in Portugal with greater flexibility, by giving priority to defense related projects but open to other sections such as IT, energy, automotive etc. Link for the full Article:
http://www.epicos.com/epicos/portal/media-type/html/role/content/page/default.psml/js_panename/News+Information+Article+View?articleid=144446&showfull=false

Exports is a major thrust area for the company, mainly in the aerospace sector and it expects exports to contribute 60-70% of revenues in the next five years.

Tata Advanced Materials, maker of composite components for defence, aerospace and industrial applications, is aiming to become one of the top 10 global players and record $1 billion revenue over the next 10 years from a meagre $20 million now.

“I see Tata Advanced Materials as a significant global player in composite solutions in defence and aerospace and in the global top 10 in the businesses we operate in,” as per the April issue of Tata Review, an in-house magazine.

“This would mean attaining revenues of a billion dollar, from the current level of just $20 million,” he said. Major portion of this could be appropriated for Offsets if properly worked out, adds this Blogspot.

Posted by Brigadier (Retired) Sukhwindar Singh at 8:53 AM 1 comment:

Greece has amended its Offsets Guidelines. The main reason behind this was the fact that the new Guidelines should reflect the shift of focus from the Armed Forces to the Defence Industry. The new legislation was approved on December 2006 as a Ministerial decision (a law) and not as guidelines as it used to be up to then. According to the new law, "Offsets Benefits (OB)" are the additional benefits provided within the scope of a specific procurement and should be regarded as a compensation/recovery towards the local industry.

Offset Benefits should be perceived as a part of the armament expenses, which the foreign suppliers are liable, following an inspection by the competent MOD bodies. Offset Benefits are obligations deriving from the main procurement contract.

Furthermore the new legislation also foresees the introduction of Greek Added Value (at least 35% for Greek bidders) , and Greek Industrial Participation (for International bidders - % to be specified) as an additional requirement to offsets.

Larsen & Toubro and the Defence and Security Division of Europe's EADS will form a JV to make defence electronics in India.

The JV will focus on design and development of electronic warfare, radar, military avionics and mobile systems for military applications for India and rest of the world.

The JV is subject to approval by the Indian government.

"The Indian Defence and Security market is growing fast and we want to grow with it," Stefan Zoller, Chief Executive of EADS Defence & Security said in the statement.

India is among the largest buyers of defence equipment as it plans to spend more than $30 billion over the next five years to modernise its largely Soviet-era weapon systems, and is also launching its first military spy satellite next year.

Posted by Brigadier (Retired) Sukhwindar Singh at 8:34 AM No comments: