Offsets could come in both 'cash & kind' with a fair mix. Defence Offsets in India would involve large funds, initially to generate and then to pay-off against contracts for Exports, FDI, JVs, TTs, etc. There is an inevitable need to regulate, account and monitor this Fund.

One effective way is to create 'Defence Offsets India Fund', and an Agency to manage Defence Offsets in totality. All the offset funds, incoming and outgoing, should be managed by this entity. Once the Funds are held by this Agency, these could be appropriately disbursed as per the Offset Policy.

These funds could be generated back-to-back relating to the pay-outs by the MOD to the Vendor(s) for contracts in vogue, and should conform to the timeline of the Project (s). Needless to mention that offset projects themselves, in most cases, should adhere to the Main Contract time frame, if not completed earlier.

We are to get almost 10b USD in Defence Offsets in next 5 years. There are large issues related to defence offsets not yet resolved. And the important of them all is ‘Defence Offset Banking’.

In the absence of a ‘National Offset Policy’, it is presumed that the Policy articulated by MOD, and its Working Hub, Defence Offset Facilitation Agency (DOFA) discussed till date remains in vogue.

A new DPP 2008 is expected shortly. Hopefully all inclusive!!

There appears to be ‘high profile’ lobbying wrt ‘Defence Offset Policy’. This should be seen through. We feel that our national interests should not get ‘choked’ in the process and we retain liberty to utilise the funds properly; field the Equipment/Systems/Sub-Systems locally manufactured using the offset funds for the Armed Forces as the need be; and also export unconditionally products & services coming from co-design, co-production, TTs, JVs, etc.

I wish to bring focus on ‘Banking of Defence Offsets’ in this Post.

I feel that we should permit banking of defence offsets. This provides more time and opportunities for the Vendor(s) to select suitable partner(s). This will speed-up development of Indian Defence Industry, especially Defence MSMEs. This also brings addl commitment from the Vendor(s). Once ‘banked’, the Vendor(s) should be ‘free’ to expend these offsets as per the Policy in vogue. Utilisation of ‘banked offsets’ should follow the timeline of the Main Contract, or shorter than that. These ‘offset funds’, should be utilized and monitored appropriately. These could be invested in any defence projects if only Direct Offsets are permitted. Inclusive Growth! Defence MSMEs participation!! Transparency Issues!!!

We need Indian definition of ‘Defence Offset Banking’; of course drawing experience from Others.

Offsets value for Indian Defence Industry are astronomical, which means that each foreign vendor will need multiple Indian Partners to meet offset obligations. The MOD estimates that offsets will generate approx Rs 40,000 crores (US $10 billion) worth of business for Indian Defence Industry over the next five years. Just one forthcoming purchase, the acquisition of 126 Multi-Role Combat Aircraft (MRCA) for about Rs 42,000 crores, will generate offsets worth Rs 12,600 crores.
Other purchases in the pipeline include artillery guns for over Rs 10,000 crores, 317 light utility helicopters for Rs 4000 crores, 12 VIP transportation helicopters for Rs 1000 crores, mid-life upgrades for 52 Mirage-2000 fighters for Rs 8000 crores, and 12 heavy lift helicopters for Rs 2500 crores. The Indian Navy is shopping for up to 30 Long Range Maritime Patrol (LRMP) aircraft, and 16 Anti-Submarine Warfare (ASW) helicopters to replace its antiquated Sea King fleet.

To meet offsets liabilities that will arise from these purchases, prospective vendors signed a large number of MoUs with Indian companies during the Aero India 2007, and later. Defexpo 2008, now provides opportunities for negotiations to translate those MoUs into action plans. DPSUs are likely to be major beneficiaries of offsets business, but foreign producers are however keen to partner with private sector companies, which may be more flexible and responsive.

Important amendments to the offsets policy are awaited. Vendors are being assured that the MOD is likely permit “offsets banking”. This would allow vendors to go ahead with setting up partnerships with Indian companies, with the assurance that offsets generated would be credited towards future defence contracts.
The MOD may also allow foreign vendors to credit TTs to Indian manufacturers as offsets.

The MOD is still to establish a fully-equipped department which can handle the enormous workload that will arise from offsets. Presently a small cell, Defence Offsets Facilitation Agency (DOFA), under a Joint Secretary, my find it difficult to handle offset-related workload.

DOFA (MOD) could be expanded into a multiple-discipline Defence Offsets Management Agency (DOMA) or whatever name, which will be equipped with the policy managers, legal personnel, accountants, and the technology and production specialists that will be required for handling the entire gamut of offsets. This may happen progressively.
The evolution of offsets policy and the constitution of DOMA are being watched keenly by foreign vendors, as well as by private Indian Defence Industry. The Private Sector has lobbied actively for a role in such an Agency; which the MOD has not accepted. But with so much money at stake, global defence industry has its eyes focused on the MOD, waiting for the policy announcements that could open the floodgates for offsets.
Brigadier (Retired) Sukhwindar Singh
http://www.indiandefenceindustry.com/
Credit: Business Standard, 16 Feb 2008, Preview Defexpo 2008.
Posted by Brigadier (Retired) Sukhwindar Singh at 8:26 AM No comments:

A lot has been said and discussed wrt to Offsets especially relating to Direct, Indirect and Banking of Offsets. All this goes well at a conceptual level. What should concern Us all is the Implemenation of Offset Projects. How do we ensure that the Offsets flowing back are credible and worth-while?
To my mind, following are cardinal parameters to check and ensure implementation:
1. Technology Needs of the Importing Country. Are these being met? Do we become self-reliant by getting these technologies, and are able to set-up manufacturing facilities in India to meet our future needs? And export part of our production without any restrictions? Is the up-graded technology from the Vendor(s) assured all the time at a future date?
2. Exporters/Vendors are not holding back the state-of-the-art Equipment, Systems and Technology. Why would the Vendors create a Competitor?

3. The Products on offer are NOT over-priced, both Main and Offset products & services.
4. Banking of offsets? 'Lobbying' and 'Pressure Points'! Govt. should be able to handle these!!

Transparency, and Related Corruption Issues. Let there be any views, but these are some of the major points for consideration, discussion, and implementation in the Offset Projects.
Brigadier (Retired) Sukhwindar Singh
http://www.svipja.com/
http://www.indiandefenceindustry.com/
Posted by Brigadier (Retired) Sukhwindar Singh at 7:02 PM No comments: 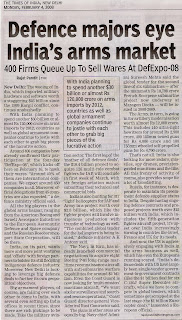 Credit: The Times of India, 04 Feb 2008. An Article by Rajat Pandit.
5th International Land and Naval Systems Exhibition is being held from 16 – 19 February 2008 at Pragati Maidan, New Delhi. The Exposition will be held by the Ministry of Defence, Government of India, in association with Confederation of Indian Industry (CII). It will cover Land, Naval and Associated Sub-Systems and Systems. It is a biennial exposition.

The Defexpo would showcase latest technologies in the field of marine and land systems. The Apex Committee of the Defexpo is Chaired by the Hon’ble Raksha Mantri.

The aim the Exposition is to showcase capabilities of the Indian Defence Industry, both Public and Private, and the DRDO to visiting delegations with a view to foster collaborations, promote exports, and tie-ups.

Defexpo 2008 assumes special significance in view of the impending acquisition of capital equipment and systems by the Indian Armed Forces to the value of approx 30 b USD in the next five years.

Defexpo throws open vast opportunities for Defence Professionals to engage themselves with Indian & Foreign Defence Industry in various capacities. However, it should be done within Govt. Orders and Regulations on the subject, and in full transparency. Ex-Servicemen could engage themselves with Defence MSMEs, and Large Corporations for Offset Projects, JVs, TTs, etc, from their place of settlement. USD 10 b is likely to flow back to India as Defence Offsets in the next 5 Years. It presents tremendous opportunity for professionals with defence domain expertise.

Visit to the Show, Conferences and Seminars would be of particular interest to the Defence Community. You could Register FREE for Visit & Seminars online. Pse visit
http://www.defexpoindia2008/